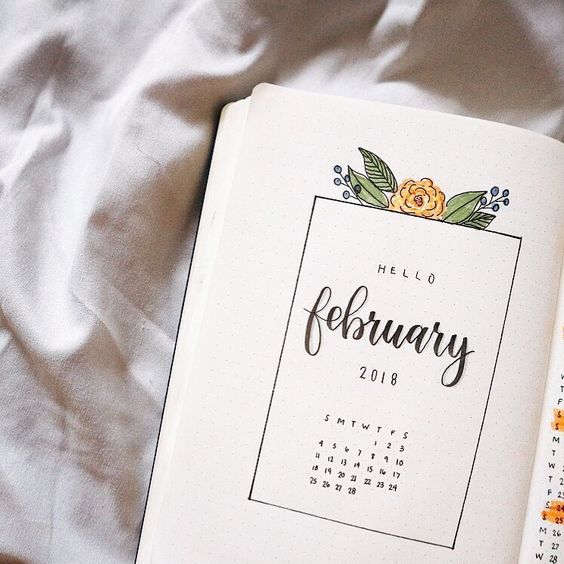 Weirdness, but the good kind
My birthday’s February 8th, and this year was a bit special. At school that week, instead of having announcements/worship/chapel, there was a couple who spoke on various topics each day.

On Thursday, my birthday, the guys and girls split up to hear all about dating. The lady started off by giving away prizes to people who recapped what had been said the previous days. Then, COMPLETELY out of the blue, she asked if it was anybody’s birthday. The girls in my grade turned toward me, which got everybody else’s attention, which prompted her to walk up to my aisle and pass down to me this choker. 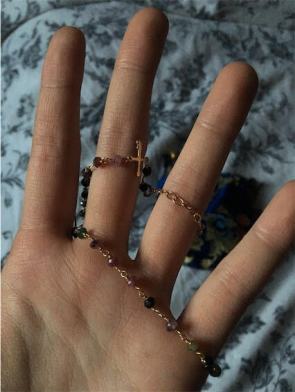 I think of it as my present from God.

It was also an artist’s birthday that day or something, and this was the Google doodle for that day. 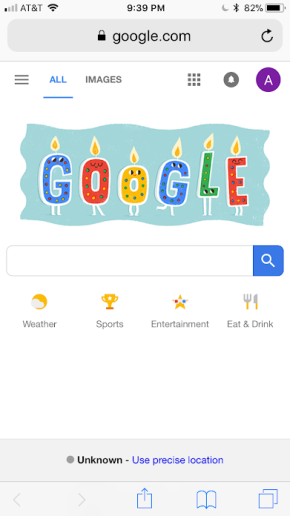 Fun and games
In Spanish, we just learned our yo-go verbs and to practice, we played the flyswatter game. Here’s how it works. The teacher writes all the words, scattered, on the whiteboard. We’re split into two teams, and all the members takes turns taking an actual flyswatter and going to the board. The teacher says a word in English and the two people go head to head trying to be the first one to slap it. Whoever wins gets a point for their team.

It was SO MUCH FUN. We’ve only played twice, but hopefully it’ll become a regular way of reviewing. I also hope we don’t do boy girl teams again. When we did that, it was close the first time, but the second time, we beat them so badly that it wasn’t even fun. The first time though, I got a little too aggressive and kind of pushed the other person. Oops.

Then in my technology class, we had a free period and played the name game. You might have played it at a birthday party or something. Everybody writes a name on a slip of paper and puts it in a hat or something. Usually people do famous people or fictional characters. One person reads out all the names twice, and then the game begins. You go around in a circle and each person tries to guess what name somebody else wrote. If you guess correctly, that person joins your team. Whoever gets all the people onto their team wins.

This guy didn’t know what he was going so he just put down Blake, and it thoroughly confused everyone. The first time I put down Trump throw everyone off. It worked for about half the game, and then I got guessed. The second time I went with the name of the highschool principal to try and stay under the radar, which did not work at all.

Not to sound like a broken record, but it was SO MUCH FUN. I can’t wait to play that game again too.

The best thing ever
This is what my cliff hanger was about in January’s post. The first Saturday of February, me and some of my people went to Panera for dinner. Beforehand, I was a little nervous because I wasn’t sure how it was going to go. Was it going to be brimming full of awkwardness? Were we going to eat in uncomfortable silence? Was it going to be an absolute disaster?

Thankfully, the answer to all of those questions was no. The awkwardness was kept at a very low maximum. We were able to just talk and talk, going from one conversational strand to another. The food was good too. We went to Panera and then ice-cream afterwards. As the title says, it was the BEST THING EVER. Another dinner has already been planned for March.

A crash course on K-pop
A lot of people I know have small group meetings on Wednesday evenings, but mine are on Fridays. Because it’s not a school night, we have Fun Nights the last week of every month. For February, we went to a new Asian bakery (you know, with boba and egg tarts and buns and those random sausage pastries) that opened and hung out.

The girls in my group all love K-pop in varying degrees, so it inevitably came up. It’s a topic which I knew very little about, and I was curious. I realized that’s one thing I like about myself: when my friends are interested in something, I become interested too, and I make an effort to learn about it.

I was told multiple times that K-pop was a can of worms that I didn’t want to open, but nah, don’t worry, I’m fine. One of the girls started talking to me about it, and wow, there is a lot going on. It has its own slang, people.

For example:
A group: I accidentally called them K-pop bands a few times. Not all of them are bands because not all of them play instruments. Therefore, they are groups.
Bias: your favorite person in a particular group.
Bias wrecker: the person that would be your favorite if your bias wasn’t. In simpler terms, your second favorite.
Maknae: the youngest person in said group.
Comeback: a new album.
Sasaeng: crazy obsessed fans who might need to branch out a little from K-pop into other interests.

Crossing my fingers that this continues
One of my friends is reading Twilight (which she got some hate over even though readers are on the same team so dude, leave her alone), and the idea of a book club was born during passing period. Its members right now are her, two other friends (one of whom likes the books Ready Player One, John Green, Eleanor and Park, Dumplin’, and Miss Peregrine’s School for Peculiar Children), and me. I am SO EXCITED.

I have dubbed it the Bad Books Book Club because during the scheming stage, my Twilight pal remarked that she only wanted to read good books in the book club, to which I said no, we’re just going to read bad books, we’re going to be a book club of bad books.

Our first read hasn’t really decided yet. Well, the truer truth would be that basically nothing has been decided yet. It might be The Hate U Give, it might be Holding Up the Universe. As of right now, it’s all up in the air.

Lost in translation
My dad went back to China for his dad’s 85th birthday, and while he was there, he sent me this picture. 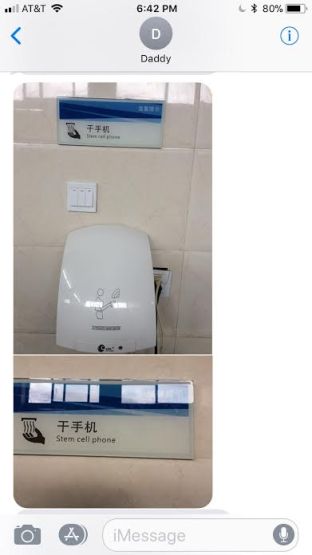 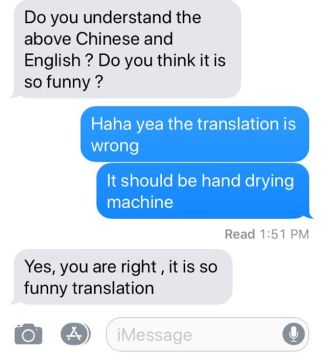 This year I actually asked people for stuff instead of leaving it completely up to them, and it was fantastic. I highly recommend it. I realized that hoping my friends and family would somehow read my soul and get me a perfect gift was not going to happen and that I liked the concept of surprises but not the reality of them. 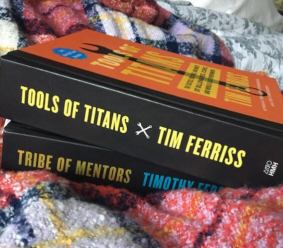 (Tools of Titans, Tribe of Mentors)

I listen to his podcast, The Tim Ferris Show, and I decided to try out his written stuff. The two books are pretty similar. They’re both full of thoughts, ideas, and advice from people who are very good at what they do.

I’m 82 pages into Tribe of Mentors, and it’s definitely the kind of book I write in. There’s so many quotes from it that I like, especially the answers to the question, “What advice would you give to a smart, driven college student about to enter the ‘real’ world’? What advice should they ignore?'” He also asks people about books that are important to them, so my to be read list is going to go from the moon and back after I’m done with it. 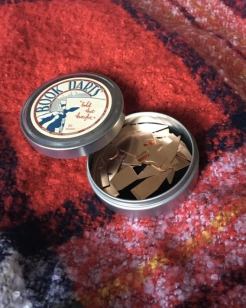 The following picture shows them in action. 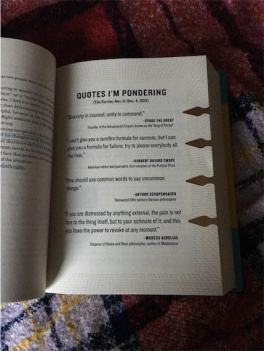 That page is from Tribe of Mentors. Interspersed between his interviews are quote sections, and I liked all four of them on this page. You probably can’t read them, but this is what they say:

“Diversity in counsel, unity in command.” – Cyrus the Great

“I can’t give you a surefire formula for success, but I can give you a formula for failure: try to please everybody all the time.” – Herbert Bayard Swope

“One should use common words to say uncommon things.” – Arthur Schopenhauer

“If you are distressed by anything external, the pain is not due to the thing itself, but to your estimate of it; and this you have the power to revoke at any moment.” – Marcus Aurelius 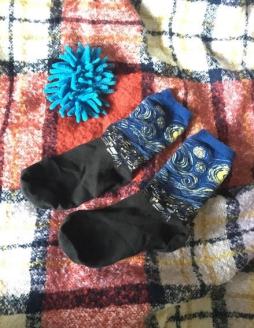 The fuzzy blue ball wipes off the oily fingerprints on your phone screen better than anything else I’ve discovered, which is very cool. And the SOCKS: aren’t they absolutely beautiful? At school, I saw a girl wearing them and just stopped in my tracks, amazed. 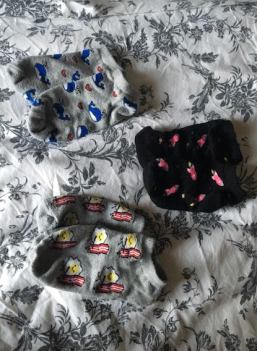 They’re so cute. I love whales, I love bacon (eggs are alright), I love space stuff in general, I love patterned socks, I just LOVE SOCKS. But no more, please. My collection is the perfect size right now.

Well, I guess one more pair would be okay. But just one though. 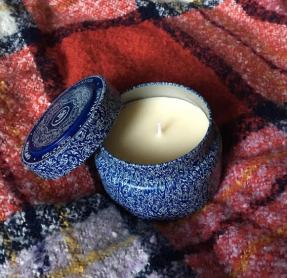 Not only does it smell amazing, but the container is beautiful as well. That way after I use it, it’ll double as a great container. Candles rock. 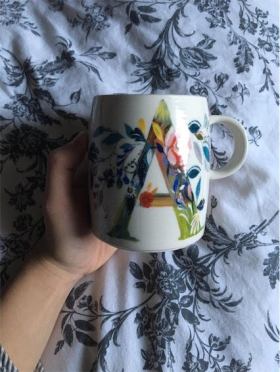 IT’S SO PRETTY. Just drinking out of it makes me feel more put together.

Which pair of socks is your favorite? I would have to say that mine are the Starry Night ones.
What games do you play at school? Kahoot will forever be a favorite. We play Jeopardy in biology, and that’s fun too. There’s also Quizlet Live. Quizlet is really upping its game. I remember when its only features were Learn, Flashcards, Write, and Match. It used to be that Match was the “game.” Now there’s Gravity.
How do you file away the quotes you like from books? I know there are people who write them all down, but that takes too long. I do have a Word doc full of them except I haven’t added to that in quite a while. Maybe I’ll start doing huge post compilations of them. They’ll be mostly for me because I doubt that would be interesting to read.