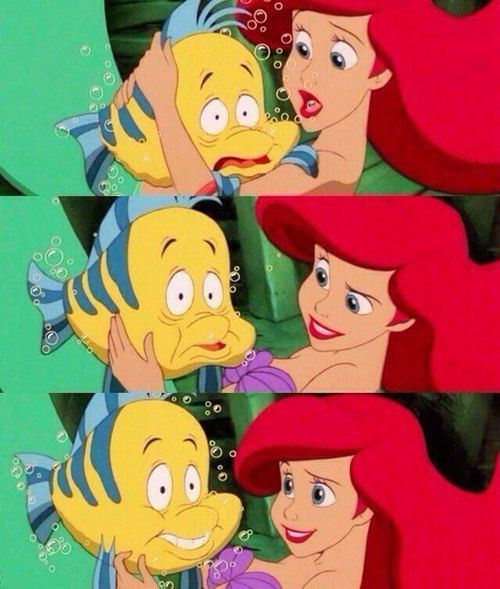 Months ago, I posted poems Jonathan wrote for school because I did not know what I was going to write for the blog that week, and today, I am again stealing something he wrote for school as my post. This time, he had to write a satire. This is what he came up with. I think it’s brilliant.

Flounder, a flounder and the best friend of Princess Ariel, died on May 4 in his hometown of the kingdom of Atlantica. He was at the young age of 10. Princess Ariel told us the cause was suffocation from a plastic netting. “I was swimming around trying to look for gadgets and gizmos to collect, but when I turned around, one of the thingamabobs had killed Flounder.”

Every year, around 1,000,000 marine creatures die in the kingdom of Atlantica alone. In an interview a few months ago with King Triton, the ruler of Atlantica and father of Princess Ariel, he said that if this keeps on happening, there will be no one for him to rule anymore in five years.

He plans on building a wall along the coast so no land humans may throw trash over into their kingom. He says he is willing to separate his daughter from her family and husband, Prince Eric, in order to better protect his kingdom. King Triton told us that many marine creatures die by eating the plastic thinking it’s food or by being entangled in it.

We also got an exclusive interview with Sebastian, King Triton’s advisor and servant and also artist behind the hit song “Under the Sea.”

Mr. Sebastian, how are you doing? What is the atmosphere like down there?
Life is unsweet here under the sea. Right here on the ocean floor, such terrible things surround us. Down here all the fish are unhappy as off through the waves they roll. The fish on the land are happy ’cause they’re in their bowl with no pollution.

I am so sorry to hear that. I was not aware of how serious the pollution was. I thought the pollution up here was worse.
Trust me darling, it’s worse down where it’s wetter, take it from me. Just this past week, the newt who played the flute died from a plastic bag, the lings on the strings died from plastic consumption, the blackfish that sings, the chub who played the tub, and the carp who played the harp, all died from the BP oil spill.

Do you have any solutions for us to help reduce ocean plastic pollution?
Well, you can reduce your use of single-use plastics, recycle properly, help clean up my home that you humans are destroying, and spread the word. But no matter what, I really hope King Triton builds that wall so you humans can stay out of our lives for good. By the way, I was the one who advised him to build the wall. I believe you must pay for the wall. It’s an easy decision-make a one-time payment of $5-10 billion.

You really want us gone that badly?
You have made life under the sea terrible.

One last question. What happened to your crustacean band? I haven’t heard any music form you guys in years.
[crying] Well down in the muck here, most of my bandmates have been killed.

Thank you for taking the time to talk to me, Mr. Sebastian. I hope you have a good day.
I just hope I don’t get killed on my way home.

Has there been an assignment you had to do for school that turned out pretty cool?
What are your favorite Disney movies or animated movies in general? Mine are Big Hero 6, Frozen, Tangled, and McFarland, USA.
Are you excited any of the upcoming Disney movies? For 2019, Google says there’s:
-Aladdin (live-action)
-Toy Story 4
The Lion King (live-action)
-Artemis Fowl (which I have bad feeling is not going to be a good adaptation)
-Maleficent: Mistress of Evil (the sequel to Maleficent)
-Noelle (a Christmas movie about the daughter of Santa Claus)
-Star Wars: The Rise of Skywalker
and
-FROZEN 2!!!!!!!!
I am really excited for this movie.

6 thoughts on “A Disney satire”

Leave a Reply to The Story Sponge Cancel reply