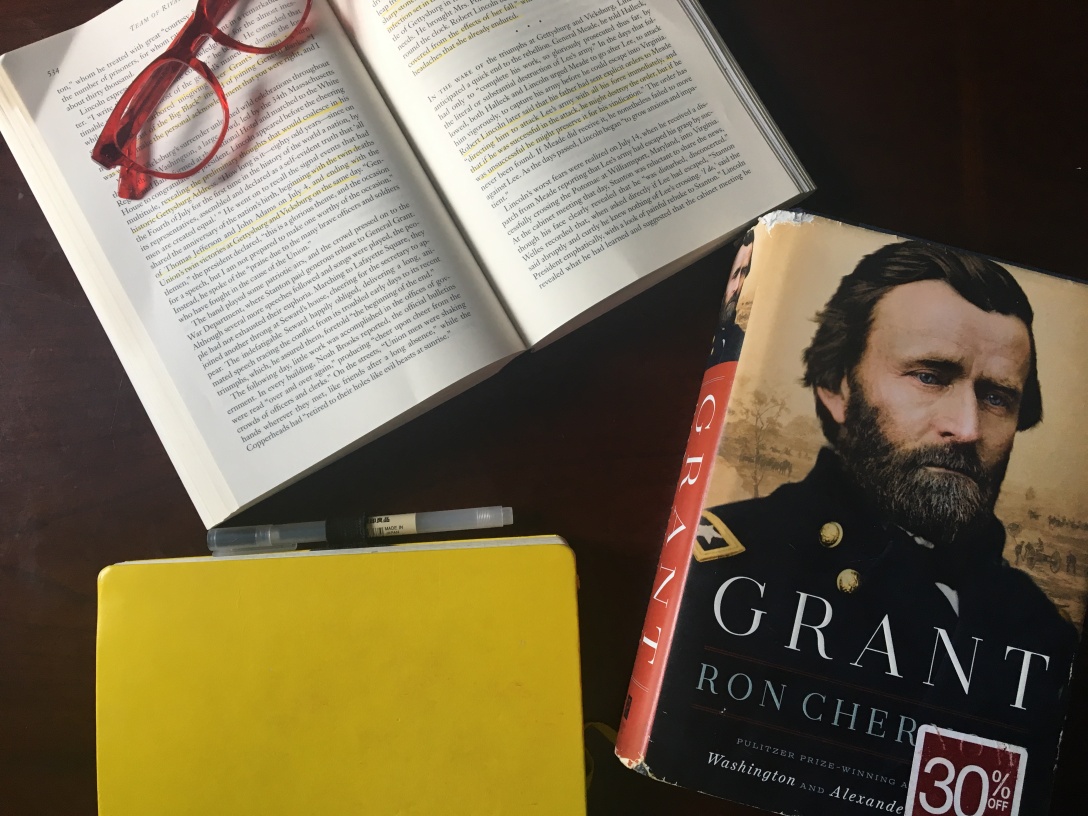 For the past three years, I’ve read one super long non-fiction book every year. I wouldn’t call it a tradition yet because I feel like it takes a solid ten years for something to become a tradition, but it’s at least in its toddler stage. (A toddler tradition!) In 2016, I read Team of Rivals; in 2017, I read Grant; and in 2018, I read The Making of the Atomic Bomb. Instead of doing mini-reviews for each of them, I wrote about the memories I have of each book. The cool thing about long books is that because they take so long to read, I actually remember where or what I was doing while reading them.

Team of Rivals: The Political Genius of Abraham Lincoln by Doris Kearns Goodwin

Keywords: Abraham Lincoln, the Civil War, the presidency, politics, a crazy presidential cabinet (as in the second dictionary definition, not the first)

First line: On May 18, 1860, the day when the Republican Party would nominate its candidate for president, Abraham Lincoln was up early.

Last line: The deathless name he sought from the start had grown far beyond Sangamon County and Illinois, reached across the truly United States, until his legacy, as Stanton had surmised at the moment of his death, belonged not only to America but to the ages-to be revered and sung throughout all time.

As with a bunch of the books that I read, I first heard about Team of Rivals because Anne Bogel. It was on Episode 43: Fiction FOMO and curing Hamilton hangover with Sarah Stewart Holland. I distinctly remember Sarah talking about how the ending made her cry and her husband being like, you knew what was going to happen. That was what made me want to read the book.

I don’t remember how I came to actually own the book-I think I might have run into it at Barnes&Noble?-but I do remember sitting/laying on my dining room floor on a quiet and long summer afternoon and slowly making progress through the book. There was also this one quote that just killed me, but I wasn’t able to find it afterwards even after searching for it multiple times. I guess that comes with the territory when it comes to lengthy books.

The book didn’t make me cry like it did Sarah, but it did make Abraham Lincoln my favorite president. Every time I say that, I always feel compelled to add that I don’t know anything about a great majority of the American presidents, but I feel like even if I did, he would still be my favorite.

(By the way, Sarah Stewart Holland is the co-host of the podcast, Pantsuit Politics. I haven’t listened to it before, but it sounds amazing and is on my list of podcasts to try.)

Keywords: a birth to death biography, the Civil War, a president I’d heard of but didn’t really know

First line (of the introduction): Even as other Civil War generals rushed to publish their memoirs, flaunting their conquests and cashing in on their celebrity, Ulysses S. Grant refused to trumpet his accomplishments in print.

First line (of the book book): On April 27, 1822, Ulysses S. Grant was born in Point Pleasant, Ohio, tucked away in the rural southwestern corner of the state near Cincinnati.

Last line: But he knew that no thing of that existed in the narrative, that it had been too sore a point with Grant, who, in his quiet, inscrutable way, carried his private thoughts on the subject to the grave.

I have two memories connected to this book: the first is of buying it, and the other is of reading it.

I bought the book in a bookstore near SMU, Southern Methodist University. Actually, it might have been SMU’s bookstore, period, because there being a lot of school merch inside. My dad and I had gone into the store to wait until it was time to go to my friend’s nearby birthday party. The bookstore section was kind of small and didn’t have the greatest selection of books, but there was a feature table with all of these huge hardback copies of Grant. (Writing about this now I realize it was because the book had just come out. This checks out with my logic because the book came out in October, and my friend’s birthday is in November.)

I don’t normally buy books, so it was half on a whim, half intrigued by the good internet reviews that I decided to get it. I went up to the cash register to pay, but when it rang up to around thirty dollars, I almost didn’t get it. The only reason I did was because my dad told me the price made sense, the book was huge! (I don’t know why I remember how much the book was, but this part checks out too. The inside flap says the book is forty dollars, but there’s a sticker on the cover saying it was 30% off. Plus tax it would’ve been exactly $30.31.)

I’m not sure exactly when I started reading it, but I know I brought the book with me on my family’s Christmas vacation that year. One day on the way back to where we were staying, our rental car hit a pothole and got a flat tire. It was on Christmas Eve or something close to it, so on top of the fact that there weren’t many people working, there weren’t any spare rental cars either. We sat there for a few hours, just waiting. While other people in my family sorted things out, I made good progress on Grant. This is exactly why you keep a book on hand at all times.

The Making of the Atomic Bomb by Richard Rhodes

Keywords: so many brilliant people, science explanations (that were confusing and that I skipped over), history, politics, these amazing sentences that just made the book

First line: In London, where Southampton Row passes Russell Square, across from the British Museum in Bloomsbury, Leo Szilard waited irritably one gray Depression morning for the stoplight to change.

Last line: Behind him the light changed to red.

This is the one book out of the three that I checked out from the library. I did give a copy to my brother-in-law as a present at one point though, and good thing too because otherwise I wouldn’t have been able to get the first and last lines without checking it out again. Actually, I think I gave it to him for Christmas last year when my parents and I visited him and my sister. I know I spent a lot of time sitting on their couch and reading this book, but I also vaguely remember finding it weird that there were two copies of the same huge book in close proximity to each other.

Also, I don’t think it’s random that I read both Grant and The Making of the Atomic Bomb over Christmas break. In my opinion, Christmas break and summer are the best times to read long books. It’s too demoralizing to try and read a long book during the school year and still be reading the same thing after three months.

Long non-fiction books that I want to read

Christmas break is coming soon(!!!), so I made a list of five titles that I’m thinking about reading for this year’s long non-fiction book.

The Power Broker: Robert Moses and the Fall of New York by Robert A. Caro

Victoria: The Queen: An Intimate Biography of the Woman Who Ruled an Empire by Julia Baird

The Last Lion: Winston Spencer Churchill: Visions of Glory 1874-1932 by William Manchester (Volume I of III)

Do you like non-fiction books?
What is your opinion on long books?
Which book out of the five looks most interesting to you?
What are you reading right now?