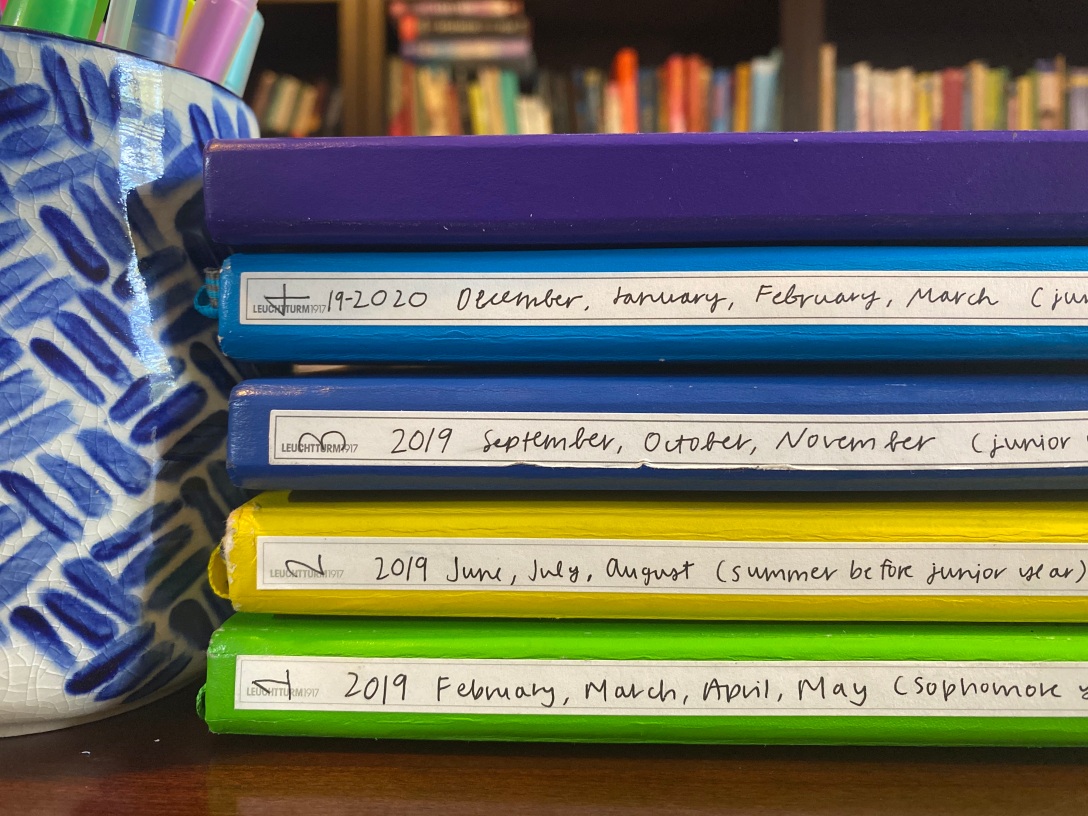 The other week, my art class groupchat was sending around Bestiefy quizzes (AKA #238 on the list of things to do when you’re bored), and I was like, there’s a website where I can make a quiz that I can then make my friends take? Awesome.

I didn’t really like their automatic questions, so I came up with my own. One of the questions I wrote was, which of these am I most likely to have with me? The choices were: book, notebook, waterbottle, and I don’t remember the fourth option. The right answer was notebook (which some of my friends disagreed with) because I take my notebook with me almost everywhere. It’s like part of my brain and heart and soul condensed into a single object.

I’ve always been slightly obsessed with notebooks, but I’ve also had a pretty long track record of not finishing notebooks. I would start using a notebook for one thing, but then it would become unnecessary. Or I would try a system I saw somebody else talk about (bullet journaling, carrying a tiny notebook everywhere and then transferring that stuff into another notebook), but it would be too complicated.

I was looking for an elusive combination of to-do list + space for random thoughts + things I want to keep track of + organized + maintainable. Finally, after quite a bit of trial and error (nearly as much as Edison), I’ve found a system that works for me.

In the past year, I’ve completely finished four notebooks and used them all in the same way with just a few tweaks here and there. (APPLAUSE, ENTHUSIASTIC APPLAUSE.) This post is overly detailed (emphasis needed) because this is the guide I wish I could send through some internet wormhole to my younger self.

I’ve always loved notebooks, but then I found out about Leuchtturms and kind of fell in love. Actually, really fell in love. Look at how many colors there are!

After I ordered the purple one I’m using right now, I sent three friends pictures of my past four notebooks and asked them to guess which color I chose next–and all three of them got it right!! I was utterly shocked, but apparently it was (and I quote) “kinda obvious.” Because I sort of did rainbow order? That observation never crossed my mind because first of all, it was completley accidental, and second of all, yellow goes before green, hello.

The Leuchtturm style I specifically use is the hardcover A5 with ruled paper. There’s four different types of paper: ruled, grid (they call it squared), dotted, and blank (plain).

One Christmas, my sister got me a pack of Muji pens, and every since then, literally the only pens I use are all Muji. Since then I’ve managed to get some other people hooked on them too.

There’s only a few Muji stores in the US, so I normally get them on their website or on Amazon. The Muji website is sometimes stocked and sometimes less stocked, but unlike Amazon, you can buy individual colors on it. Amazon is good for packs and pen refills.

For my notebook, I almost only use black (in either .5 or .38, .7 is too thick for me and .25 is too skinny, but preferences). The exception is physics. When it comes to physics, sometimes you just need some colorful ink to make things better.

So I had the notebook and the pen, but therein hod a problem: every time I reached to write in my notebook, I also had to find a pen, and sometimes that meant having to upend my entire backpack–outrageous, right? It was unacceptable. I needed a magical tool that would connect the two together.

This was the first candidate I tried, and unfortunately, it was a fail. In the picture above, the one I had was like the one on the right. Because the direction of the loop was in the same direction as the clip, I had to put it at the top edge of my notebook.

I think this type of clip was made for notebooks with thinner covers, which is not among the Leuchtturm’s various qualities. Just pushing the pen through the elastic band made it slide partway off.

Finally, the pen loop decided it had endured enough jostling and decided to escape. It was successful in this endeavor, and I was sad. But it’s okay because you know what they say: there’s a lot of other pen loops in the seationary. So my quest to find the magical tool continued.

Then it was brought to my attention (probably as I was surfing the Leuchtturm website) that they sell pen loops of their own! And look, they have the same color options for the loops as they do for the notebooks. Waaaait, that means I could color coordinate the two. I could match, and I could also mix and match. The possibilities.

And then I realized each of them was five dollars. Sorry dreams of complementary color schemes, maybe another day. It’s not you, it’s me. Bad news: the search continued. Good news: I was so close to finding the one.

And this is it! My magical tool. If you have prime, each one comes down to around seventy cents. What I don’t understand is why I’ve never seen somebody else use one of these. They’re amazing. They should be commonplace. (I know some of my friends are going to read that sentence and be like, um sure.)

The only note I have to make about these loops is that for the Muji pens, it’s difficult to slide them through while they’re capped, so I put the pen in first and then cap it. If anyone wants to challenge me to an inserting-pen-into-pen-loop speed competition, I’m up for it.

For each month, I print out these floral calendars made by the website A Piece of Rainbow. A warning: this website uses a lot of bandwidth. Okay, I don’t 99% know if “bandwidth” is the right word for what I’m thinking of because my only idea of its definition is from context clues, but basically, if I keep the website open for too long, I get a notification on my computer saying it’s “using significant energy” and I should close it. In other words, it takes a while for me to actually get to the PDF because it’s slow.

Sometimes I write things on the calendar, and sometimes I don’t. It’s another anything goes world. For April, I wrote down birthdays and a day when I was expecting news.

The Monthly and Weekly Pages

This is the most bullet-journal-esque part.

After the calendar, I have a page for the month. For this April, I have nothing except for the backlist movie I’m watching this month, but usually I have written down other plans for the month.

(Detour: I also scribbed down some things for May I want to remember–like how the NFL schedule for next season comes out on May 9! Don’t know how games are going to work now, but I’m really hoping the 49ers still come to Dallas for a pre-season game. Actually, if they don’t allow spectators, I think I would rather them not come at all. So close yet so far.)

After the monthly page, I have weekly pages. That’s where I write my to-do lists.

On the right is a beautiful template of what I do: date, skip a line, the subject or topic of whatever the page is for, skip a line, and then words. On the left is an example of this: it’s thoughts I scribbled down for this post. (Does this count as being meta? I think this is my first time being meta in a blog post.)

I use a new page for every new subject, so sometimes (as shown above), I don’t even use half the page. This by far is not the most economical way to use a notebook, but what it lacks in thriftyness is made up for me in organization.

The Leuchtturms come with two bookmarks: one striped, one solid. I put the striped one at my weekly page and the solid one at wherever I actually am in the notebook.

The Lists in the Back

These lists are things I want to keep together in one place instead of scattered throughout the notebook, so I just put them all in the back. Right now I have ten categories, which sounds like more than it feels like in my head. Some of these might make zero sense from the names I’ve given them, so I’ll try to explain.

– Memories: Your typical diary except I just do phrases.
– Ideas: As in ideas that can be executed in tangible ways, not as in the Enlightenment.
– Doorknobs: I don’t really know how to explain this, so I’ll give an imaginary example. If I ran for president, I would put “announced candidacy” (or however it works) as my first point, and then as things progress, I would add “first debate” or “ended candidacy” or whatever.
– Wrinkles: Kind of like a repeat Memories list, but for things that made me impatient, angry, sad, annoyed, frustrated.
– Connections/Throughlines: For example, I remember we read this famous poem called Rime of the Ancient Mariner in English class, and then I kept seeing the metaphor or the “albatross” being referenced in different things I read.
– Learned (About Everything Else): Random, interesting facts. For example, NASA’s PDF of its acronym dictionary is 260 pages.
– Learned (About Myself): Things I learned about myself.
– Good (Encouragement): Nice words that people say to me.
– Good (Funny, Happy): Another repeat Memories list, but specifically for things that made me laugh or really happy.
– Praying & See God: I do bullet points for prayers and stars for (the usually very mundane) ways in which I see God’s everywhereness.

Wait, oh my goodness, I completely forgot to mention this very important fact: these pages of these notebooks are numbered. I know right?? The combination of the numbered pages + the index at the front is probably the main reason I love Leuctturms.

(Another reason I love them is the pocket at the back. Sometimes I put money in it as a makeshift-wallet, and every time I feel cool at the register being like yeah, I bet you never would’ve guessed that this is where I keep my money, hm? Go ahead, be jealous.)

This is how I do my indexing. After I finish a notebook, I go back through. Some pages are scratch pages (like all the dozens of pages I’ve used for physics homework), and some pages are ones I want to keep track of.

For those in the second category, I highlight the SUBJECT line of the page in either purple or blue. Purple is more for personal journals/thoughts/feelings and blue is more for lists/notes. Hypothetically if I do this, I won’t have to flip through every page of several notebooks if I want to go back and find something.

It’s the finishing touch. The notebook comes with a page of different labels. I use the spine one. At the top I write which number notebook it is, the year, the months I used it for, and which school year it was during.

And now this guide is finally over.

Do you have a notebook that you use for basically everything
What brand of pens do you use?
What do you wish your younger self had an overly detailed guide to?