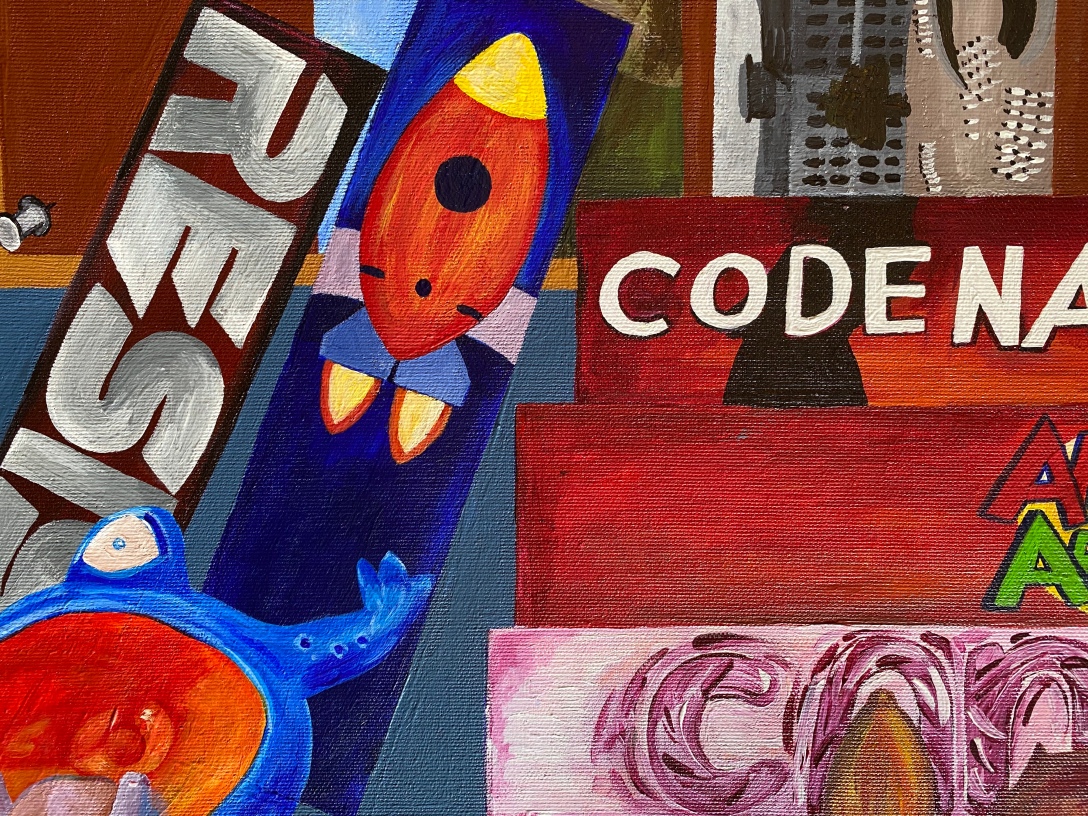 What’s the point of having friends besides having people to play games with? I can’t wait until we’re seventy years old and playing aggressive games of Uno and Mafia. Until then and until I can see humans in person again, these are the games I’ve been playing with people while zooming.

Description: Minesweeper but with words, teams, and clues

I appreciate this game so much that before I learned there was an online version, I tried to DIY a virtual version by setting up my physical Codenames board game, taking photos, and texting them to a group chat. (Sometimes this would really not work though, like when I accidentally included the spymaster card in the photo.) But some coder or group of coders really came through by making this website version of it.

There’s two teams: Blue and Red. Each team has a spymaster.

If you’re the spymaster on your team, you click the button at the bottom right, and switch to the secret board. The red-font cards are the Red team’s, and the blue-font cards are the Blue team’s. The dark gray card is the death card: if a team clicks that one, they lose immediately. Everything else is neutral. Clicking one of those ends the team’s turn.

The spymasters take turns going. The team with nine cards (which you can see at the top left) goes first. Each turn, the spymaster gives a one-word clue and how many cards are related to that clue. For example, if I was the Blue team’s spymaster, I could say “MATERIALS 2” to try and get my team to guess “IVORY” and “GLASS”, or for Red team, I could do “TEA 3” for “HONEY,” “WATER,” and “LEMON.” The team that clicks all their cards first wins.

Clues that connect two cards are the norm, but it’s more exciting to do three or four. (I’ve never played a game where somebody did more.) My friends and I have played quite a few rounds of Codenames now, and here are some of the hacks we play with.

1. Combine Words
The best example I could think of for this board is “GLITCHY 3” for Blue team–“GLASS,” “PITCH,” and “KEY.”
2. Research Clues
For Blue team, you could do “DEION 4.” For these, you usually need to spell out the word. So hopefully what would happen is that they would search Deion, see Deion Sanders, read that he was both a professional football and baseball player, and choose “FOOT,” “BALL,” “PITCH,” and “DIAMOND.”
3. Use Letters As Common Factor
This might be against the official rules, but sometimes there will be three words that start with “P”, and the clue will be “P 3.”
4. Use Position As Common Factor
On this board, for Blue team (dang, I think Blue’s words are easier for this board than Red’s), you could say “TOP 3” and try to get “MUG,” “PLANE,” and “PITCH.” There’s the risk of hitting the neutral cards, but sometimes it’s worth it.

I like to play where the spymaster gives no information to their team besides the actual clues—like specifying if it’s Research Clue, or saying that their teammates got all the ones they were going for, or giving facial expressions–but it’s completely up to you and your friends to tweak how you want to play it.

Does this one count as a game??

Description: Sudoku except with letters and riddles

Recently I subscribed to The Atlantic because I keep seeing their writing pop up everywhere and because their print magazine looks so cool, but it turns out the thing I’ve been accessing most is their crossword.

Being a crossword-solver is something I’ve always aspired to be. Skateboarders are cool, funny people are cool, but crossword-solvers are SO COOL. At the beginning of quarantine, I tried doing some puzzles from this book that I bought years ago, but there was a reason it was almost completely blank. Without Google and the answers in the back, the puzzles were impossible.

My hopes of attaining crosswording abilities refused to leave that easily though. When I saw that the Atlantic subscription came with the crosswords section (the Nytimes requires a separate subscription), I couldn’t not try it out.

One thing I didn’t know about crosswords is that it actually matters what day a crossword comes out on. The Monday one is the simplest and they get progressively harder through the week. The Atlantic has them Monday-Friday and Sunday, and I couldn’t even get through the Tuesday one, let alone the rest of the week. After a few minutes, I would just give up and click “reveal board.”

While struggling to do one last Friday, I sent screenshots to friends to see if they could help even though I didn’t expect them to be interested at all. Before school let out, I had asked my physics teacher if he had any tips on doing crosswords, and one of the tips he gave was that it’s more fun to do them with other people. My reaction to that was one of extreme skepticism because I thought to myself that a negative number of my friends would voluntarily want to do crosswords.

Some of my friends (like JONATHAN) have repeatedly teased me for reading, so I assumed that they would destroy crosswords for being even more nerdy than books, but apparently, crosswords are fun while books are boring. In retrospect, I should’ve expected this because they do like puzzles, and one of my friends is insanely good at Word Hunt.

I shared my crossword screen with them while zooming, and we were able to finish the one in above in twenty-four minutes which is crazy. I think I would’ve gotten less than ten clues if I did it by myself. It was so fun, and I’m hoping solving the Sunday crossword together becomes a tradition for at least the rest of the summer. Which brings me to the moral of this story: physics teachers are always right.

Description: Pictionary, but everyone for themself

This one seems to be the Tom Hanks of online games. I haven’t heard anybody say they don’t like this game yet.

You can “Create Private Room” and then share the link with your friends, or you can click “Play!” and join a public room. You can also change the words to another language, like how one time my friends decided it would be a good idea to play in Spanish.

I didn’t want to use screenshots from a public game, so I made a visual aid.

In the middle, there’s a blank square for the drawer to draw in. The website determines the order of who draws. When it’s your turn, three words pop up on the screen, and you click which one you want to draw. (I think it’s more fun when everybody picks the hardest option.) At the bottom you can change colors, widths, erase, or start over.

There’s a chat box on the left is for everybody else to type their guesses in. (Spelling counts.) There’s dashes at the top of the drawing box to tell you how many letters are in the word, like hangman. You get points for guessing the word and for guessing it faster than other people. The drawer gets more points if more people guess it. Whoever finishes with the most points wins.

Have you played any of these games before?
How do you like to call best–facetime, Zoom, Instagram Calls?
Do you have any recommendations of other games or things to do? Two others that I’ve been playing are Contact and Drawing Blind. I linked to videos of people playing it that will hopefully explain them—while also making you laugh.